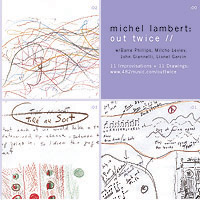 A co-release with Montreal's Jazz from Rant. Sponsored in part by the Canada Council, this recording is a collection of 11 spontaneously improvised pieces using Lambert drawings as graphic scores, each seeking to combine visual and musical expression into a single, cohesive language.

Named after the trips to Los Angeles and Pernes Les Fontaines, where it was recorded in two sessions, Out Twice was conceived as a combination of Lambert's two loves, the artwork he has created since he was a child and his extensive background in formal music composition and improvisation. 10 of the 11 tracks are first takes done without rehearsal, documenting the musicians' initial reaction to the artwork and the mix of visual cues, written notation, and spontaneous musical interaction. Lambert likens the process to cartography, and the use of a graphic map to collectively seek routes, directions and paths through a shared landscape. The unified result features Lambert with pianist Milcho Leviev and bassist John Giannelli on five tracks, with the other six performed by a trio with bassist Barre Phillips and saxophonist Lionel Garcin.

The drawings used for the sessions can be seen at 482Music.com/OutTwice

"...an unqualified success. Music with character and originality flows from his trios... abounds with complexity and challenge..." — Frank Rubolino, All About Jazz

"In more ways than one, this is a singular release." — Marc Chénard, Squid's Ear

"Rare to hear music of this depth and substance, period. But from within an improvised context, it\'s even more impressive. Lambert\'s pure expressive nature is evident from the outset and is continually refined throughout this set. Lambert is due more recognition, this recording can only help his already lofty position as a unique musician." — Michael G. Nastos, WEMU-FM, Ypsilanti, Mi. www.wemu.org