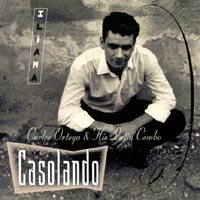 An astonishingly beautiful collection of modern day originals informed by the love songs of Old Latin America. Jubilant, celebratory, melancholy, soulful, and loaded with pop hooks, Iliana features the lush vocals of Carlos Ortega and the fiery classical guitar of Charlie Baran. This cd has become a favorite of all who have acquired it.

"...probably the finest debut to come out of the Windy City this year." — New City

"Latin music has received a lot of attention this year, with the release of several popular albums that combined the talents of old masters with newer, younger talents. The most successful was Ry Cooder's collaboration with Cuban son legends on Buena Vista Social Club. As great as that was, many other deserving bands were ignored. Not only does Chicago based Casolando merit as much attention as the others, but I believe they're better. Rather than a semi-nostalgic jam session, Iliana is an album made by a tight, working band. This results in a stronger identity that differentiates them from more generic Latin collections, lending a consistent feel throughout the album. The musicianship is masterful. Charlie Baran is an astounding guitarist. Their live performances showcase his intricate picking that leave audiences breathless. Dave Hiltebrand navigates his six string bass with nimble virtuosity, adding a lively, modern edge to the band's traditionally folky sound. In the liner notes, Carlos dedicates the album "to the musicians who played for love and maybe a cup of coffee in the Latin American cafes of my father's time." It sounds like his father passed down the musical knowledge of classic Latin music. I'm not an expert, but this sounds like very authentic 40s style music. Yet, Ortega exudes a youthful energy that never lets you forget this is contemporary. With songs like "Ojos Pa' Matar (Eyes to Die For)," "Te Esperare (I Will Wait)," he plays the role of the quintessential Latin lover, crooning his love songs with a voice as beautiful as the words. Next time you want to woo back your chica, sneak this onto the A-side of that next mash tape." — Fast 'n' Bulbous