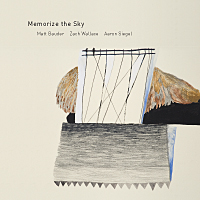 Memorize The Sky is the first full-length recording from the decade-old improvising collective of the same name, featuring saxophonist/clarinetist Matt Bauder, bassist Zach Wallace and percussionist Aaron Siegel. Often resembling electronic music despite being performed on acoustic instruments, these eight tracks were culled from over six hours of improvisations recorded in the fall of 2005. This release is the follow-up to 2005's 2 + 2 Compositions, a compositional collaboration with Anthony Braxton that Paris Transatlantic's Nate Dorward called "an extraordinary document."

"...something to marvel at quietly and return to repeatedly." — Derek Taylor, Bagatellen

"...amazing on many different levels... they have created an acoustic texture music that sounds entirely electronic, but is not in the least... they have achieved a balance of sounds that is perfectly level, and depends on acute listening... their musicianship is honed and harnessed to a focal point that is at once ritualistic and futuristic." — Michael G. Nastos, All Music Guide

"They\'ve been working together as a trio since the end of the 90s, and it shows in the subtle interplay and concentrated listening on these eight pieces. It\'s all very organic stuff, from the track titles to the instrumentation, which, though evidently influenced by the laminal improv of post-AMM EAI, revels in its wood and metal. With the possible exception of \"Etch In Wood\", on which all three musicians reveal a sensitivity to melody and harmony on a par with their timbral sophistication, each of the tracks maps out and then stays within the confines of a small plot of land defined by a small number of specific techniques, from the taps and high multiphonics of the opening \"Raft of Stone\" to the rich low drone of the closing \"Path of Spider\". Along the way there are luminous bowed vibraphone clusters (\"Lake of Light\") and all manner of impressive but never showy extended techniques (\"Field of Ice\" is particularly striking) in what is an attractive if a little introvert set." — Dan Warburton, Paris Transatlantic

"...the trio makes its way through a series of improvisations which evolve into forms of dazzling subtlety and gestural control... combining sterling extended technique and a lush sense of timbre and density to create striations of textural elegance. Their previous release with Braxton showed intriguing promise. With this release, they deliver." — Michael Rosenstein, Cadence

"Soft as clouds and containing enough space to let their thoughts commingle gradually, the session rides on a feather chariot." — Jim Santella, All About Jazz - New York

"... acoustic bass or vibraphones establish a fairly monochromatic sound field. The horns and other percussives etch figures within that audio surface like a stylus on wax, dipping in and out but leaving an indelible mark..." — Bill Meyer, Signal to Noise

Memorize the Sky — The Wire