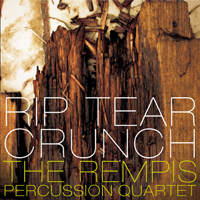 "The name of Dave Rempis's latest group is fair warning: never before has the local saxophonist led a band that hit this hard. Bassist Anton Hatwich provides a stable fulcrum with his thrumming, insistent vamps, around which drummers Frank Rosaly and Tim Daisy, both on trap sets, play a dynamic array of swinging beats, interlocking Latin motifs, martial cadences, and nuanced, meterless textures. Even at full throttle the two drummers mesh precisely, despite their divergent styles: Rosaly's is fluid and sinuous, busy with double- kick flutters, while Daisy's is more spiky and agitated. Rempis sketches keening alto and tenor lines across the surface, taking a more overtly melodic tack than he does in Triage or his free-improv quartet with Jim Baker. At other times he switches to baritone and plunges down into the ensemble's dense and surging rhythms, using his horn like yet another percussion instrument--and it's then I start thinking this might be the best new jazz band in town. The set I caught a couple weeks ago at Hotti Biscotti created an unstoppable momentum with its seamless transitions, opening with a polyrhythmic whirlwind worthy of late - 60s Pharoah Sanders and building from there." - Bill Meyer, Chicago Reader

"...the record all fans of these fantastic musicians have been waiting for." — WNUR

"Saxophonist Dave Rempis embodies all of the best qualities of the Chicago improvisational music scene: he’s a gifted but disciplined player who knows his instruments inside and out; he’s a fearless, imaginative improviser; and he uncomplainingly works his ass off...Rip Tear Crunch (482 Music, 2006), is one of the year’s best—and most bracing—releases." — Paul Olson, All About Jazz

"...connects to styles and historical moments far from jazz ...the quartet\'s sets flow with inexorable logic and irresistible momentum from African- and Caribbean-influenced beats before moving into meterless textural explorations and tumultuous barrages." — Bill Meyer, Downbeat

Pick of the Week — WNUR

All About Jazz Italia