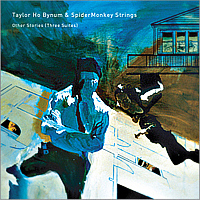 Other Stories [Three Suites] is the debut CD from trumpeter/composer Taylor Ho Bynum's SpiderMonkey Strings. Named after two mythic tricksters, Anansi the Spider of West Africa and the Monkey King of China, this all-star ensemble brings a genre-defying spirit and sense of humor to its eclectic extended suites.

"With SpiderMonkey Strings, I am blessed to work with many of the finest musicians and improvisers on the East Coast," Bynum writes. "In 2002, I received a commission for the recording of a film score ("The First Three Lives of Stuart Hornsley," directed by Leigh Dana Jackson) for string quartet. I was so excited by the personalities and musicianship of that string quartet, that I combined it with the guitar, tuba, and drums I had been performing with to to create a working band, and my focus for composing and bandleading. Along with composing in the Ellington tradition of writing with specific musicians in mind, I have also been particularly influenced by the concepts of Charles Ives and Anthony Braxton for musically independent sub-ensembles coexisting in one sonic space. The instrumentation gives me a wealth of different compositional possibilities."

Bynum has been called "a cutting edge trumpet phenom" (Boston Phoenix), "a creative force" (Boston Globe), "a distinct voice that never succumbs to simple paths" (Cadence) and "a marvelous cornetist with an outwardly directed post-bop sensibility (AllAboutJazz.com). The Village Voice's Francis Davis adds, "Bynum is one of the savviest trumpeters to come along in recent years, a growling sound-and-space man in the tradition of Lester Bowie." In addition to sideman work with legends including Braxton and Cecil Taylor, he has appeared on more than 30 recordings and performs regularly with the Fully Celebrated Orchestra, the Jason Kao Hwang Quartet, the Matana Roberts Quartet, Ghanaian master drummer Kwaku Kwaakye Obeng's band and the avant-salsa group, Zemog el Gallo Bueno. He has also recently toured Europe and North America with Braxton's Sextet, Twelvetet, and Trio, with more performances coming this fall. Along with SpiderMonkey Strings, Bynum leads his own sextet and has an ongoing duo collaboration with dancer/choreographer Rachel Bernsen.

"I have had different projects called SpiderMonkey for many years. I have a fascination with trickster myths and trickster mythology and so SpiderMonkey, of course, being named after the two great trickster spirits: Anansi the Spider and the Monkey King, from Africa and Asia respectively. For me, the trickster embodies a lot of the attributes that are necessary to be a creative artist, a sense of humor, a sense of reverence, a type of spirituality, a willingness to play in the ambiguous areas. It is not all black and white. It is not all good and evil. It is the unknown and we should celebrate that. So I have always had this fixation with that and so often, when I have a project of unusual instrumentation, I named it SpiderMonkey... It is a totally different place to be, an incredible challenge for me because there are certain things that I know how to do when I am in front of a bass player and drummer that I just can't do in this context. It is a whole different way for me to blend as a cornet. I don't want it to be me with strings. I want it to be a band that has a sound that has strings and a cornet in an organic way, as opposed to a featured soloist with a string quartet behind them. It's a great challenge to figure out how to write for that, how to be a part of that, how to play in that." -Taylor Ho Bynum

"Publisher's Pick of the Week" — Michael Ricci, All About Jazz

"Bynum seamlessly blends improvisation with through-composition on three suites that couldn’t be more different....an album that's sure to intrigue those unafraid to have their music travel to unexplored places and use less than conventional instrumental combinations to get there." — John Kelman, All About Jazz

"...an intriguing document of new work... sure to challenge and delight listeners for decades to come." — Michael Anton Parker, Downtown Music Gallery

"Publisher's Pick of the Week" — Michael Ricci, All About Jazz

"The most remarkable trumpet player at the moment is without a doubt Taylor Ho Bynum..." — Didier Wijnants, De Morgen

"Taylor Ho Bynum has had an impressive career. He’s appeared on as many albums as he is years old—that being thirty—and has worked with Cecil Taylor, Bill Dixon, and Anthony Davis. He studied under and tours with Anthony Braxton. He’s also performed in some strong ensembles of next-generation players, including the Fully Celebrated Orchestra and a trio with Jeff Song and Curt Newton... Other Stories is Bynum’s first release as a leader and composer, and it’s impressive in its ambition..." — Kurt Gottschalk, All About Jazz - New York

"Bynum is not only a meticulous craftsman in regards to complex structures, but he is also, at heart, a gorgeous tunesmith." — Troy Collins, One Final Note

"Taylor Ho Bynum, a close associate of polymath Anthony Braxton, has emerged as one the most exciting and diverse players on the current New York scene in the last few years, leading a variety of radically divergent groups. The ensemble he brings to the Bimhuis is one of the most unusual, placing his spindly, lyric horn lines within a dense thicket of harmonically striated chamber sounds. As heard on the group’s lone recording, Other Stories (Three Suites), the rubbery tuba lines of Joe Daley provide a fat cushion for vertiginous plucked and bowed string lines (delivered by the top-notch line-up of Jessica Pavone, Thomas Ulrich, Jason Kao Hwang and Stephanie Griffin). Drummer Luther Gray and guitarist Pete Fitzpatrick helped shape and gently prod Bynum’s curving, heavily episodic compositions along, while the trumpeter ranges freely on top without ever getting lost." — Peter Margasak, Amsterdam Weekly

Other Stories — The Wire

All About Jazz review #3

All About Jazz Italy